Though William Faulkner is often attributed with the expression “In writing, you must kill your darlings,” the expression first appeared in a lecture On the Art of Writing by Sir Arthur Quiller-Couch as, “Whenever you fell an impulse to penetrate a piece of exceptionally fine writing, obey it – whole-heartedly – and delete it before sending your manuscripts to press. Murder your darlings.” In essence, writers must eliminate that which they become too attached.One school of thought is that if you become too emotionally attached with a piece of your writing, you no longer have creative control and editing is all but impossible. Another point is that sometimes, a well written sentence, phrase, paragraph, or chapter just doesn’t fit the rest of the body of work. Even a complete piece of writing can become a darling if the author is too attached to it. No matter how beautifully written it is, if it doesn’t play well with others, then you just have to kill that baby.

Once, I had spent long evenings writing a story about a man who was slowly having his mind wiped away. It was quite spectacular (in MY opinion) and full of fantastic visual delusions. I read it over and over and loved it more every time. It was my darling. I had friends read it. They loved it. Then one night I was editing it for submission, trying to make sure I didn’t cut anything crucial to the plot when it dawned on me that the entire story was wrong. It was written in first person. It was compelling. But it was also a narrative told primarily through back-story. How can the narrator remember the past when his mind was wiped? Oops. I had become so emotionally attached to this story, my vision was blurred and I lost sight of the basics. There was only one thing to do. Find new friends to read my stories. Oh yeah, I also had to murder my darling.

Good writers know when to kill their darlings. I’m still learning. But sometimes the victims of this kind of slaughter never get the recognition they deserve. They get buried in the unmarked graves of an author’s mind or in a wadded up in the wastebasket. All too often, the remains of these gems never surface again.

But alas, times have changed since Sir Arthur Quiller-Couch first suggested writers perform such gruesome acts. Resurrections abound as media outlets available to writers today allows them to revive those once dead souls through their websites and blogs. 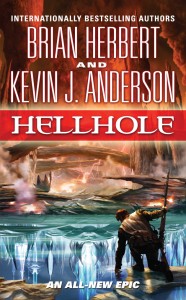 One such resurrection we can look at is by Kevin J. Anderson. Penned with Brian Herbert, the original novel Hellhole is an examination of a damaged planet saturated with outcasts and misfits from other worlds. You can read my review on the book here. This character driven story has numerous intricate storylines and is daunting enough in its published form. Wisely, the authors decided to edit some of the chapters not crucial to the story. But as a reader, this is the tree falling in the forest that we never hear. It is a loss we might not otherwise ever see in print if not for the current trend of authors sharing some of their darlings.

Posted on Andersons web page blog is Unpublished Hellhole Chapters: The Children of Amadin. This short installment is about the ill fated expedition of a religious cult looking for solitude on the planet Hellhole. They find themselves in an ancient crater left over from the vary impact that all but destroyed the planet centuries before.

It’s not easy reviewing chapters without disclosing a few spoilers, so we’ll tiptoe through these tulips and focus on the point of this article. The chapter is not as character-driven as the chapters that did make the final publication of Hellhole, but the author’s intentions are clear and effective. The planet is unforgiving. For a group to have such faith in seeking out the planet for their salvation while ignoring the warnings, it is the epitome of irony as they fall victim to its mercilessness.

Anderson follows the chapter with a little background on their intentions, the pros and cons of including it in the book and the eventual decision to murder their darling. Don’t despair. These literary victims are not without recognition as the cult and their ultimate fate is duly noted in the released edition. In hindsight, the omission of the chapter does provide the reader with a fear of the unknown that might not have been experienced had the story been told. But as a stand alone short story, it was well worth bringing back to life.

Murder is never an easy thing, especially when it’s as calculated as the murder of The Children of Amadin by Anderson and Herbert. But life’s a bitch and death is vital in preserving the literary integrity of a plot. It was a mercy killing and the readers of Hellhole should be grateful. The fact that Anderson was compassionate enough to resurrect the dead for us is even more reason for us to celebrate.

Rise! Rise up from the dead my little darlings! (This is where lightning flashes with a roar of thunder and I laugh madly.) Smooth out those wrinkled loved ones from the wastebasket. With any luck, maybe we’ll stumble across more undead victims and bring them back to life.

Lessons from the Tolkien Boycott

[youtube http://www.youtube.com/watch?v=J_hYs1jBy8Y&w=570&h=321] You can almost smell the rain, feel it hammer the leather of your trenchcoat. Hear the harmonic buzz of blue neon all around you. You can taste the Tsingtao, bubbly and cool on your tongue. If there’s a single flaw worth noting about the Blu-ray transfer of Ridley Scott’s Blade Runner: The Final […]

An interview with illustrator and graphic artist Shawn King